A Day in the life of a Toastmaster

Thankfully; for most couples who allow me the honour of being the Toastmaster at their Wedding, the day is a wonderful occasion and fairly uneventful; but every once in a while, something different and unexpected happens. Here's what happened when I was Toastmaster at a recent Wedding at Blenheim Palace.

For several days before the Wedding I was keeping an eye on the weather, as this was to be an outdoor ceremony on the croquet lawn, followed by a drinks reception, before the Wedding Breakfast in The Orangery. So it came as no surprise, while having my own lunch before leaving for the venue (1hr 40mins away) I received an email from the event manager.......ALL CHANGE!!. The Wedding Ceremony conducted by celebrant Elaine Coles as well as the civil marriage ceremony would now all be inside. So armed with my trusty umbrella for the Bride & Bridegroom, and a hastily revised running order I set out for Blenheim Palace.

After arriving at around 3.30pm and with plenty of time to spare (the ceremony was to be at 5.30pm) I met up with the event manager Emma Rogers, and carried out my pre-event checks. Toastmasters may do these in varying orders, but should cover, entry and exit points, fire provision, toilets, location of postboxes, guest books etc as well as familiarising themselves again with  the venue layout. They should also link up with any other suppliers, e.g celebrants, musicians, photographer, videographer, and confirm any additional requirements.

Due to the predicted bad weather, the drinks reception had now been moved to The Great Hall inside the main Palace, (not a bad fallback plan!), however, the only route, from the ceremony was outside across the East Courtyard and up the main steps. Having noticed this on the revised function sheet from the event manager, I knew I had to walk the route, at a pace similar to the speed the bride might walk, to see how this impacted on the overall timings for the day. As 'time spent in recce is seldom wasted and dressed in my Toastmaster 'Reds', I walked the ground. No difficulties arose from this and with the 'recce' complete it was time to meet the Bridegroom.

After a technical hitch with some music for the entry & exit to the ceremony, we were all set to go. The bride duly arrived on time with her father in his car; very suitable for the occasion but perhaps not for the weather. I took the bride's umbrella from her as she gracefully stepped from her father's Ferrari, and took a few paces into the Colonnades. 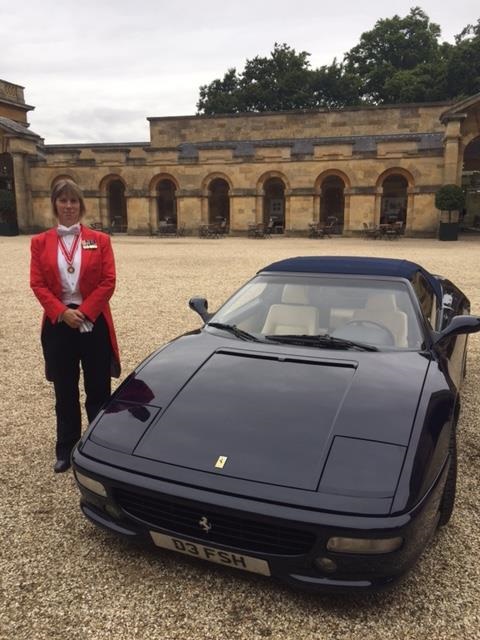 After gathering her thoughts and accompanied by her bridesmaids, page boy and flower girl (complete with a basket of petals for scattering down the aisle) the Bride was ready. As Toastmaster, it was my job to brief the guests before the ceremony on those essential housekeeping points on phones and when they could take photos.

The phrase 'never work with animals or children' is more commonly associated with acting, but this wedding had both; and in very key roles. After I had announced the arrival of the bridal party and the bride, the 2 children led the party into the ceremony room, with gentle encouragement from the Toastmaster for the flower girl to scatter her petals. Patiently waiting at the front were 2 delightful Golden retrievers; the eldest 'Hector' was ring bearer. 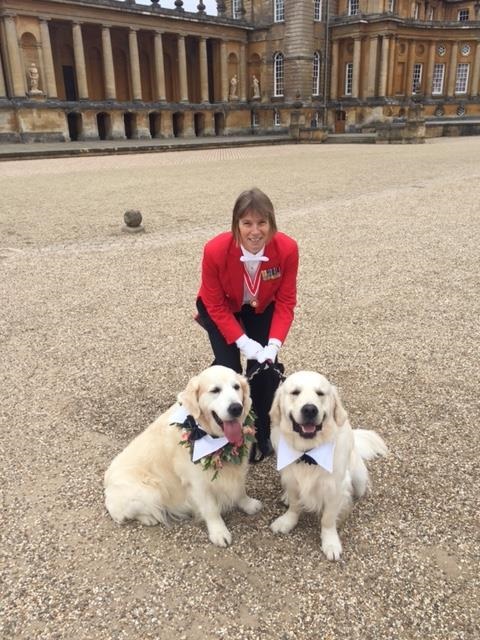 My next task was to lead the guests from the ceremony room to The Great Hall, for reception drinks while the bridal party and witnesses, completed the civil ceremony. So with my umbrella in 'follow me' city tourist guide mode, we walked the short distance to The Great Hall. Following some brief photos; as the rain had now set in, the couple joined their guests.

With around 120 guests in The Great Hall, getting them to hear me when it was time to call them for the Wedding Breakfast was going to be tricky. I needed height, so that I could call down to them rather than across. What better place to give it from, than the balcony, so after speaking to the right people, I was given special permission to access the balcony, (above the door and the flags in this picture). 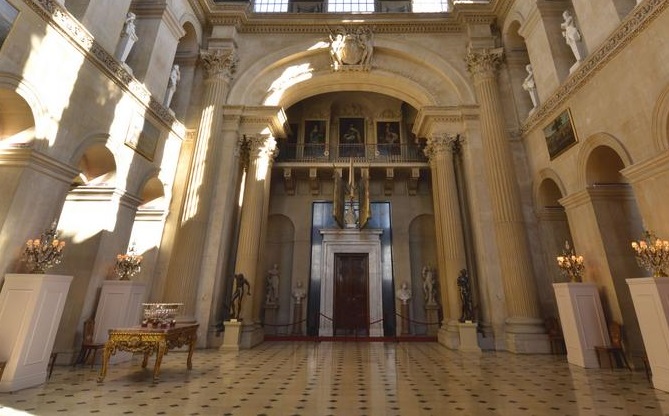 After a couple of impromptu photos in The Great Hall, and on the steps, it was off to the Wedding Breakfast in The Orangery. Once I had confirmed with the staff  that all guests were seated, it was time for the newlyweds to make their grand entrance. As Toastmaster, it's my job to make sure everybody is on their feet, and then lead the bride and bridegroom to their places at the top table.On this occasion the layout was all round tables, rather than a traditional rectangular top table. Once the bride and bridegroom were safely seated, there was time for me to catch my breath, and take stock of what came next while everybody was eating.

As dessert on this occasion was a cake of cheese, we were soon at speeches, the part of the day that some dread and others look forward to. Along with the traditional speeches from Father of the Bride, the Bridegroom and the Best Man, there was also a poem, written and read by the Mother of the Bride; and it was towards the end of this poem, that we heard, what to me were the very familiar tones of a fire alarm. This is where the Toastmaster must take control of the situation and establish quickly from the staff if there is indeed a problem or it is a false alarm. This time, thankfully there was no need to evacuate, and the Mother of the Bride continued seamlessly with her poem.

My job for the day was nearly done, with one last duty to perform.  Having previously announced the conclusion of the formal proceedings, all that was left for me to do was to invite the happy couple onto the dance floor for their first dance together as husband and wife.

As the party promised to be a long one, I bade them farewell, changed, checked the venue required nothing more from me and left, for the drive home with a smile on my face at a job well done. Almost 12 hours after I had left my house, I put the kettle on for a well deserved cuppa before retiring.

« view other articles in this category